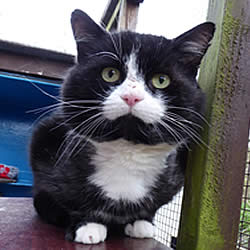 Bob was an unneutered lad, trying to find his way the best he could on the street. After the initial horror of being caught, he is now really enjoying the comforts of his new surroundings and the human company.

He has a HUGE face due to being an unneutered boy for so long, but it is a super cute face! When he first arrived he was very wary of us and hid away in his igloo, it didn’t take him long to start being very nosey and venturing out of his house to see us. He now actively seeks us out and rubs along the mesh of his cage, hoping for a cuddle. He loves a tickled chin. His wounds are healing and his fur is starting to look really nice. He is transformed from the cat that arrived. He is untested with other cats and it does take a while for their hormones to subside, but he is showing all the signs of turning into a soft lad. He will not suit being an indoor cat, he has been too used to being outside, so we would like a home with a garden to explore and a nice safe environment for him.  He needs to be an only cat as he doesn’t want to share his owner with another cat. 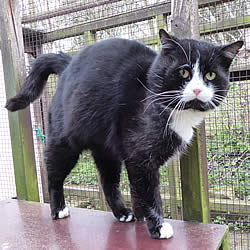