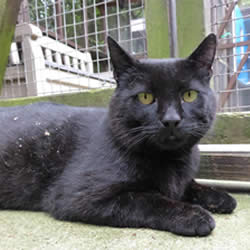 Samsung was called Samson but one of the volunteers who has a soft spot for him calls him Samsung and it just stuck! He was a stray cat, skinny and unneutered when he arrived but he has blossomed into a lovely big tom cat.

He is probably around 2 year old. He LOVES his food! He isn’t as keen on dry food so enjoys his wet food each day and sings lots of songs letting us know he wants his grub! He has a very distinctive voice so we always know it is him. When he first arrived he wasn’t great around other cats and actively hated one of our male cats but he has mellowed. He isn’t keen if an unneutered Tom arrives but if the cats are placid, he welcomes them at the door of his pen now and shows no aggression.  I still think he would prefer to be an only cat. He would not suit being an indoor only cat so maybe a neighbourhood where there weren’t a load of cats around would be ideal 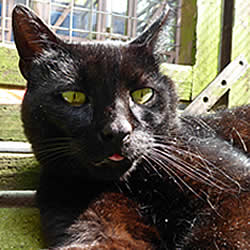 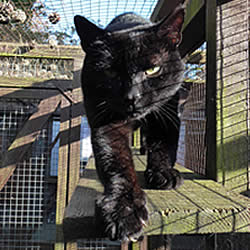