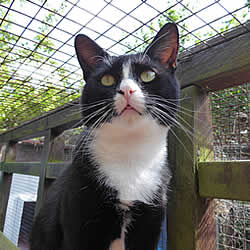 Maxwell was an unneutered boy when he arrived and was a skinny lad in poor condition.  He had a wound on his neck, probably off an abscess from a fight. Unneutered boys have such a difficult time on the street and it must be quite a relief to be saved.  He is probably around 18 months.

Maxwell had started to get the muscle of a Tom cat and the solid head.  He was very unsure about our motives when he first arrived but as the weeks have gone on, he has realised we are there to love him and he enjoys a good tickle and is turning into a big softy.  He has a lovely little white tip on the end of his tail. He is becomimg one of those overlooked cats and I am not sure why. He is a character and loves our company. He has recently been let out to be a communal cat and he made friends with no aggression showing at all. So, he should go in to a home with other cats without issues. He now runs over to the fence of his pen to see us whenever we are around. He would like a home where he can go outside, I don’t think he would like to be indoors only.